Shakespeare was part of all-male acting companies, and women were not allowed to appear on stage until 1660 in England. Shakespeare used this situation to his advantage, with a frequent plot device being the use of disguises for women characters who easily transitioned to male.

What Classic Chic Productions, with Lisa Wolpe as director, have done in A Winter’s Tale is to invert Shakespeare’s gender-bending. The cast is all women, including Corina Akeson as King Leontes. 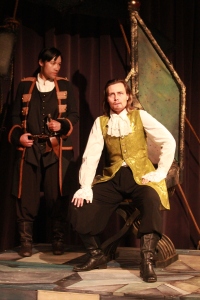 If you look up the synopsis on Wikipedia, or even better read the play in advance, I doubt you will find the play spoiled, and doing so will likely enhance your experience. There may be spoilers after the jump.

In addition to featuring an all-woman cast, the cast is racially integrated, although by stereotype, the cast might be thought to be all-white (however, medieval courts did include members from different continents and ethnicities). Some have argued that integrated casting detracts from the realism of a play, and that the audience might find it distracting. But in a play that features reports from the oracle at Delphi, plus other supernatural occurrences, the audience is already asked to suspend belief. I, of course, knew that this production would be cast in this way, but I found that it was not distracting, and in fact enhanced the production.

When the director Lisa Wolpe performed her solo show, Shakespeare and the Alchemy of Gender, she pointed out that women playing male Shakespearean characters is nothing new at all. In fact, women started doing productions very early on, but these had to be for private audiences due to the legal prohibition. Sarah Bernhardt played Hamlet. Of course women wanted access to the dramatic possibilities that Shakespeare provides in huge measure to male characters.

So with the justification out of the way, let’s look at the technical excellence of this production. The delightful young actress who plays the son of Queen Hermione and King Leontes begins the play with a sword fight. Academy Duello (in Gastown) was mentioned as a sponsor, so I presume they provided some instruction. The costumes were elegant, and gave the production a definite other-era feeling. Occasionally I got lost in the dialogue, but I found the story easy enough to follow (a common problem I have with Shakespeare, despite plenty of exposure).

The story of King Leontes is a story of a jealous husband who suffers greatly for it, and makes others suffer even more. It’s not quite the same as Othello, although there are a few resemblances. Is Shakespeare making a point about jumping to conclusions, about women’s fidelity? Who can say? Shakespeare is useless as a polemicist, but very useful for bringing issues to the fore for consideration and contemplation.

I particularly enjoyed the con-man character. Who knew that Shakespeare had such a handle on tabloid journalism, not to mention pickpocketing techniques? I can’t say if the actor drew on Falstaff, but I felt that might be the case.

As is typically the case, disguises that seem incredibly flimsy form a major plot point, and the plot does not really hold together in any contemporary sense. But that did not stop me from enjoying the play. Just enjoy it for what it is–Shakespeare is not who you go to for stark realism.

Queen Hermione, played by Alexis Kellum-Creer, handles a wide dramatic range with aplomb. I really enjoyed watching her. The supporting cast was very enjoyable as well, and as I have mentioned, I felt their portrayals of men were  believable and nuanced. 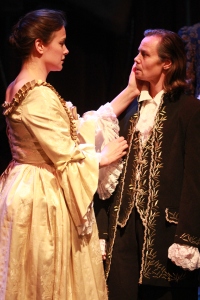 Whether it was the attention to technical details, the great acting, or the play itself, I really enjoyed the total effect that this play has. I had high expectations for her direction after seeing Lisa Wolpe in her solo show, and the production totally justifies her efforts.